What brand of spraypaint do I need to buy?

The first thing many people ask when they come into advice and tips is what brand of spraypaint they need to buy.

The short answer is that any paint will do. The paint has little bearing on your ability to cut a good stencil, so please, dont go out and spend a lot of money on specialised spray paints until you are ready.

The majority of paint people start off with will be something cheap and cheerful that you can get in local hardware stores, be it halfords for the UK guys, or Walmart for those in america. Most of these brands, halfords, aussie export and others are not bad for starting out with. They are runny, and blotchy – but they do the job.

After you get more into stencils and start to want to do work on canvas, there is more of a pressing need for paint of consistant high quality. You'll find that the specialist paints are a lot thicker, so that they drip less. Coverage will be better, and the valves will likely be of higher quality. 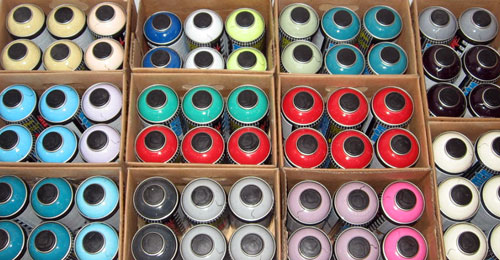 Which brand you choose is mostly up to you. When you get into specialist graffiti brands there is little to separate them apart from personal preference.

The top brands that people will likely advise you to try are:
– Belton
– Montana Gold
– spanish Montana

Montana gold is made in Germany, by a company that stole the name from its Spanish counterpart. As a point of principle, many people wont buy the german version over the spanish. there is also a difference in the paint. Montana Gold valves tend to be better, with a 2 stage pressure system, however the paint is not as good as spanish.

I would suggest from personal experience either Spanish Montana or Belton. You'll find spanish Montana is usually cheaper, with Belton and especially Montana Gold being more expensive brands.

There are a variety of other spray paint brands, Sabotaz, Pro-line, Clash, Monster and others that are designed specifically for the graffiti market. For stencilling Monster, Clash and Proline are not especially well suited. they tend to be much thicker paints for use in freehand graffiti to reduce drips. As a result they tend to be quite sticky and thick.

Kryon and Rustoleum are mainly american spray paints that can be found in most hardware stores. I haven't tried either of them personally, but they have a generally good reputation. The best way is just to buy a can and try for yourself to see what works.

There are also a variety of mind warpingly bizarre paints, usually brought out by Montana, for example, Alien, Poltergeist and Spider. 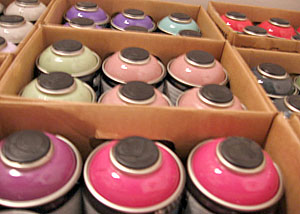 They have quite specialist qualities. Alien is a low pressure can used for outlining freehand graffiti. As a result it works quite well for stencilling, and they have a nice variety of greyscale colours. It's pretty expensive in comparison though, because the cans are smaller.

Spider is stringy and weird – NOT good for stencils at all. Having said that, you can achieve some awesome background effects with it.

Now for caps and excessories. There are many different types of cap used in freehand graffiti, the purpose of which is to very the thickness and speed of the stream of paint leaving the can. This is largely irrelevent when stencilling, however the general rule of thumb is the slower and wider the spray, the better. These caps that release the paint slowly are called soft caps, and come in many different forms.

As with some paints, the best way to decide what is right for you is to try it. You can usually buy caps in assorted bags, so just try them out and run with what you like.

Availability is another matter entirely. Brand such as Belton, Montana, Proline, Monster, Clash, True Colours, Sabotaz etc will be hard to come across, only usually found is specialist graffiti or hip hop shops, or on the internet. Sabotaz will be particularly difficult to find, given that it is only distributed currently in certain parts of Europe – Greece, the Czech Republic and Eastern European countries. They are looking to expand I believe, but don't know more than that.

Krylon, Rustoleum and Plastikote are easy to find in many DIY or hardware shops. Plasti-kote is a separate issue – it is shit quality, and often twice the price of Montana or Belton. Don't buy it.

If you decide to purchase online, you will get stung on delivery. In the UK this charge is about £10. Its as good as the industry standard, and there is no way of avoiding it if you order online. I believe Monster drop the charge, but only if you spend your life savings on paint which isnt too hot for stencils.

The best bet is to find out about local hip hop stores or graffiti stores in your nearest city. Often the train fare will be less than the delivery costs of paint. And you always have the advantage of meeting new people, getting magazines and clothes you otherwise wouldn't have known about, and checking the colours in 'real life' rather than a colour swatch on the internet.