An „urban artist” has been hired by a council to paint over youngsters’ graffiti scrawls on a wall.

Andy Birch, 33, created a 30ft (9m) mural near Rhyl’s promenade as part of a drive to combat vandalism.
His next job for Denbighshire Council is to paint a mural over the Ty Newydd Road foot bridge in the town.

He said: „If I do it too nice and twee, the kids will just go right through it – you have to keep the „graffiti” element in it.”
The mural’s theme was Rhyl, past, present and future and included seaside images such as buckets and spades, Punch and Judy and a giant postcard. 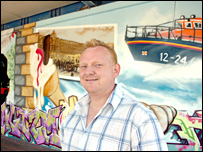 Denbighshire Council plans to create murals on walls considered „vulnerable” to graffiti as a way of deterring vandalism, although a council report has said the county does not suffer from large amounts of graffiti.
Mr Birch is a professional painter and decorator, who created his first graffiti art at the age of 13. His „tag” or signature is Dime One or Dime1.

He admits to small-scale illegal graffiti as a youngster but said what he did „was not of any worth”.
He has spent five weeks with friend and fellow urban artist Sam Fulman transforming a wall at the resort’s Children’s Village. 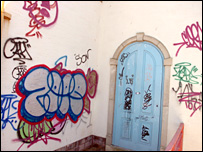 The work drew the attention of curious youngsters and Mr Birch said he hopes it will encourage those with urban art ambitions to paint within the law.
He said: „I’ve tried to encourage them to practice and do something positive, to do legal stuff. I’ve said what they are doing here is wasting their own paint.”

He said youngsters could offer to paint pieces at sites that are already graffiti hot spots.
He added: „I tell them to do something that is worth seeing and take pictures of it and when you can afford the paint, go back and do something else. 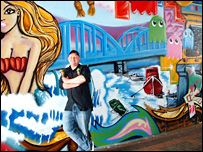 „I don’t think you can ever stop them, but you can definitely educate them and show them what’s what, to make a choice and that you have to be socially acceptable and responsible”.
A spokeswoman for Denbighshire Council said: „During the project Andy stopped to talk with many visitors and residents of all ages about the work and had positive feedback from all who stopped”.

„He also engaged with a number of those involved in unofficial spray painting and talked with them about ways to stay creative and legal, without causing offence”.
Andy Birch will hold an exhibition of his works at Speakers’ Corner in Colwyn Bay for a month from next week.