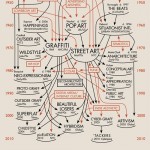 Infographics never tell the whole story in that they omit details and attempt to make clear narratives where none exist. But Daniel Feral’s GRAFFITI & STREET ART graphic, which is labeled “a 75th Anniversary celebration of Alfred H. Barr, Jr’s CUBISM & ABSTRACT ART diagram,” attempts to create reason out of the more chaotic narratives of Graffiti and Street Art movements.

The image was recently broadcast to art peeps as part of the latest press release from the people behind the PANTHEON: A history of art from the streets of New York City exhibition, which you may remember from our post about their Kickstarter a while back. 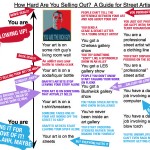 I wonder if Feral realizes how reviled Barr’s original 1936 diagram is nowadays. Or maybe he’s doing this as a parody — which I thought it must be, when I first heard about it. Either way, I like the level of ambition in the diagram but it is a very subjective diagram — much like Barr’s — that demonstrates its maker’s own perspective, preferences and biases.

The images exclude a lot of categories and subcategories, and also emphasizes other facets that seem more marginal.

More on Hyperallergic and on Jake Dobkin’s infographic challenge.