A new outdoor ‘artwork’ by the graffiti artist Banksy has been framed by residents in order to protect it FROM GRAFFITI. 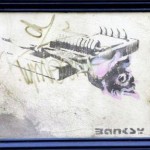 At least 20 households are thought to have clubbed together to buy the £30 glass and wooden frame to save the mural being „defaced by common criminals”.
They paid another £20 to a local builder to hang the frame, which has been cleaned at least once-a-week after it appeared on a wall in the Montpelier region of Bristol.

Residents say they have an obligation to protect the 12 ins x 18 ins piece – which shows a rose lying in a mouse trap – from harm, in respect to the Bristol born artist.

Luke Scrine, 29, said the frame has already done its job after local youngsters were spotted trying to destroy it with rude ‘tags’.
He said: „Banksy is from Bristol and we’re proud as punch about it.
„So when this appeared, we wanted to protect it from being defaced by common criminals.
„Hopefully, the frame will continue protecting what was obviously left as a gift to the city of Bristol and its residents.”